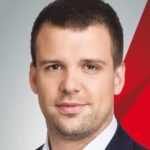 Stefan Bogoev was born on August 28, 1989 in Skopje. He graduated in June 2011 with a degree in Business Administration from the University American College Skopje. He is also a postgraduate and scholar at American College – Skopje, Applied Economics. Bogoev has participated in numerous workshops and debates on international relations. As part of his hands-on experience he has participated in Hillary Clinton’s US presidential campaign in Washington, DC (September 2016). In the early parliamentary elections in 2014 and 2016 he was elected as a Member of Parliament of the Republic of Macedonia, and in the 2017 local elections he was elected Mayor of the Municipality of Karposh.

The value of Stefan Bogoev’s property amounts to 141,346 Euros and is calculated according to data published on the website of the State Commission for Prevention of Corruption.

The media reported about the connection between the Karposh’s current mayor, Stefan Bogoev, and the Racket case suspect Bojan Jovanovski (Boki 13), as well as their family business relationship. It was also mentioned that Bogoev had the most expensive individual campaign in the history of elections in Macedonia, funded by Boki 13.

Bogoev had also signed a Memorandum of Cooperation with Jovanovski’s NGO, and the media also quoted Bogoev claiming that he had not sold any parcels for Boki 13’s ideas although it was reported that Jovanovski and Jasna Mandikj, the author of the European Elderly Home had pledged money to build the third planned nursing home in the municipality of Karposh. Bogoev testified at the Primary Public Prosecutor’s Office for the prosecution of organized crime and corruption in the Racket affair.