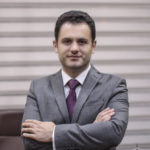 Blerim Sejdiu was born on September 04, 1985 in Tetovo. He completed his secondary education at the “Kiril Pejchinovikj” Gymnasium in Tetovo, graduated from the South East European University Law School, and completed his postgraduate studies at FON University in Skopje. He was secretary general of the football club Shkendija from Tetovo and head of the Legal Department of the International University “Balkan-Skopje”, then director of the Foundation “USKUP” – Skopje, external legal consultant and member of several NGOs. He became mayor of Zhelino at the local elections in 2017.

Blerim Sejdiu has declared reported property of only two items for Golf 5 and Audi A6. They are estimated at 5,500 or 10,000 Euros. Sejdiu has also declared stakes, his transaction account, and his parents’ estate in the village of Kopachin Dol and the backyard, as well as a third of a petrol station in KO Grupchin.

The value of Blerim Sejdiu’s property is 15,500 Euros and is calculated on the basis of data published on the website of the State Commission for Prevention of Corruption.

SCOOP has written about mayors who are bosses and heads of associations, so Blerim Sejdi was listed as the boss of the consulting and services company JANERI CONSULTING DOO, Mala Rechica, Tetovo.